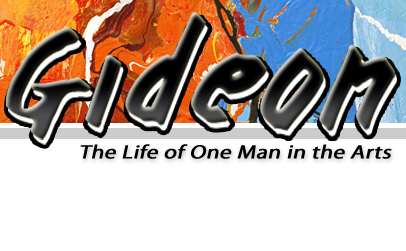 Paintings and Sculptures of
The Holocaust by Artist Gideon

One Of The World’s Most Tragic Atrocities Captured Artistically By A U.S. Army Ranger Who Was There


The Gideon Holocaust Art Collection is a remarkable record of the pain and suffering of World War II, created from the personal experiences and memories of American Master Artist and Sculptor Gideon. The experiences of World War II cast a permanent shadow of memory Gideon is unable to erase. His mind and his soul continually remind him of the horrors his vision had to endure. He is destined to paint and sculpt the images of the Holocaust; an emotional portrayal of a historic atrocity, a vivid reminder that such a shadow should not pass mankind’s way again.

This collection of powerful paintings and sculptures began in 1944 as Gideon sketched what he saw and experienced across the frontlines of Europe. When he returned home in 1946, he began painting and sculpting these memories from his many sketches and memories of POWs, victims, soldiers and battered people of the war.

Gideon created magnificent works of art from these memories, each serving as a priceless piece of history. These are some of Gideon’s most valued possessions, for they are his savored memories of one of the most terrible atrocities in history and stand to hold the memories of the millions who suffered and perished. This terrible event, burned in his soul, has continued till this day with his adding to the portrayal of it in his art.

Gideon’s life-long focus with this very special collection is that he is determined to make sure the pain and agony that occurred during the Holocaust will never be forgotten and never be repeated. Though his works portray the very depth and soul of his unforgettable war images from World War II, there is the message of hope instilled in his works.

Each step Gideon takes whether in agony or ecstasy is never empty, but filled with a force of unstoppable spirit that will proclaim him conqueror of every new horizon. His journey indeed, is an ascending one; may his works speak for both himself and history. One day, of all days, these works shall portray what is right versus what is wrong for generations to come. Never shall this dreadful event be forgotten.

If you have any comments or questions about Gideon, his works or Gideon’s Holocaust Art Collection, please don’t hesitate to email us at Rick@GideonArt.com.